She did this by using fraudulent invoices purportedly from the Illinois Department of Transportation.

According to the latest indictment in this case[iii]:

a. None of the over 179 false invoices created by Rita Crundwell had a “Illinois Department of Transportation” emblem or logo at the top of the page;

b. The over 179 false invoices created by Rita Crundwell had the word “Section” misspelled as “Secton”;

c. The over 179 false invoices created by Rita Crundwell did not have the same font or type face as the true Illinois Department of Transportation Invoices;

d. The over 179 false invoices created by Rita Crundwell omitted a contact name and phone number of an employee at the Illinois Department of Transportation if the recipient had any questions.

51. Many of the false invoices created by Rita Crundwell were made out for even amounts for hundreds of thousands of dollars which is a recognized indicia of fraud or misstatements in the field of audit1ng.

52. All of the checks made out to pay these fraudulent invoices purported to the Illinois Department of Transportation were typed by Rita Crundwell and signed only by her.

53. The custom and practice at the City of Dixon for the bill payment process was the following;

a. each invoice received at City of Dixon would be approved by the City Department head in charge and/or Commissioner;

b. a requisition would be created for each invoice;

c. the aforesaid paperwork would be sent to Clifton for entry into the City’s ledger that was kept on the computer system at Clifton

d. that Clifton would print a check to pay the invoice which would then be signed by a secured signature machine with three signatures.

Here is a copy of a real invoice from the Illinois Department of Transportation: 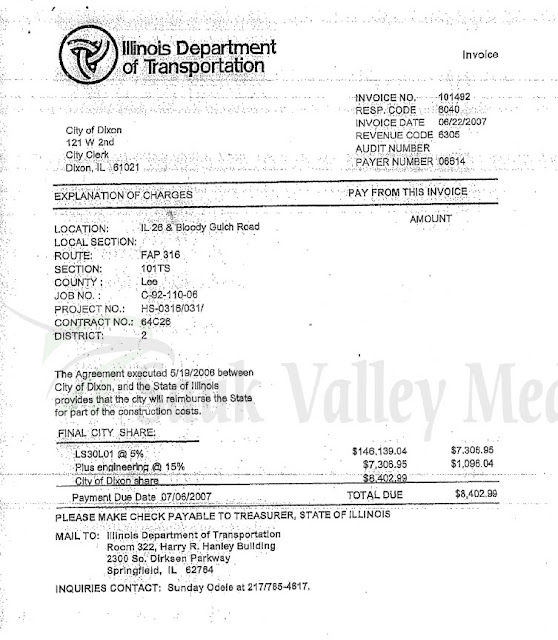 Here is a copy of the phony invoice: 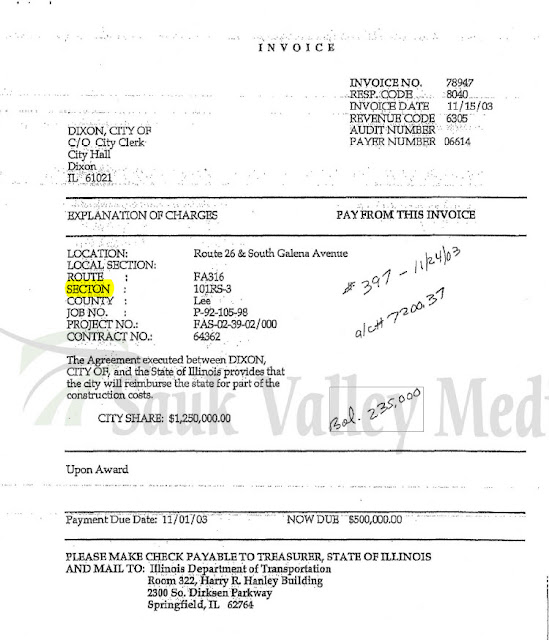 Here is the phony document with the fraud indicators identified: 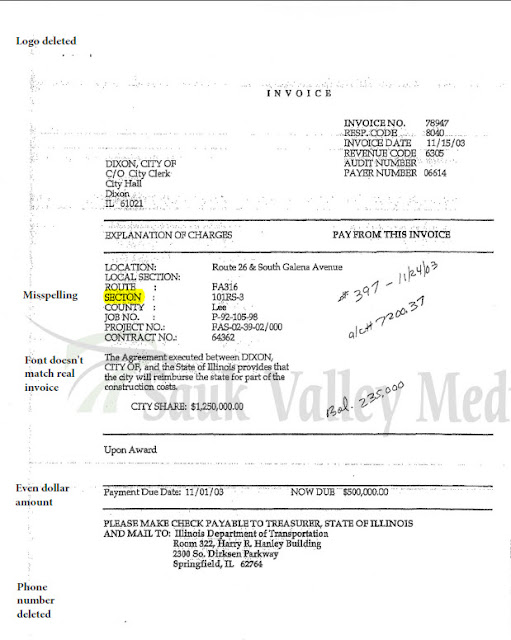 So – would you have found these fraud indicators if you were doing the work?

The auditing standards actually give the auditor some wiggle room. If we focus on SAS 99 – Consideration of Fraud in a Financial Statement Audit. There are several important paragraphs. In the codification AU section 316 here are important concepts:

¶ 06 – Fraudulent financial reporting may be accomplished by the following:

— Manipulation, falsification, or alteration of accounting records or supporting documents from which financial statements are prepared

¶ 09 an audit conducted in accordance with GAAS rarely involves the authentication of such documentation, nor are auditors trained as or expected to be experts in such authentication.

¶ 11 although fraud usually is concealed and management’s intent is difficult to determine, the presence of certain conditions may suggest to the auditor the possibility that fraud may exist.

Despite the transactions lacking:

a. approval by the City Department head in charge and/or Commissioner;

b. a requisition for each invoice; the CPA firm Clifton Larson did not uncover the fraud. According to the indictment, it did not:

Again, what we are seeing here is the challenge auditors have in assessing the validity of the transactions they review. The most critical component of an audit is the need to verify the underlying substance of the transaction – did the City get what they paid for?

When the auditor does not visit the job site or seek other ways to assure the appropriateness of the transaction, they have again let the public down.

The magnitude of this fraud is so big, and occurred over a 20-year period that a good, professional, skeptical auditor should have found this fraud!