NOTE: The information in this blog comes from indictments and depositions in the civil trial of the auditors for Dixon Illinois. The case is currently on trial. The final verdict will determine the guilt or innocence of the defendants. I’ve taken factual statements from these documents.

Who Did the Audit?

One of the questions being addressed in the civil trial taking place on the Dixon, Illinois fraud is: who did the audit?
Clifton Larson claims they were only doing compilation work and it was Janis Card and Sam Card that were responsible for the audit. Sam Card claims he only signed off on the audit report and it was Clifton Larson’s responsibility to do the actual audit work.
Mr. Cards statements are supported by billing records showing Clifton Larson billing for audit work. Clifton billed $37,000 in 2012 and Card billed for $7,000 – you can draw your own conclusions as to who did the audit work.
Here is a response from the deposition of Mr. Card:

The audit manager at Clifton Larson, who was doing the work at Dixon, made the following statements in her deposition:

No wonder the auditors couldn’t find the fraud!
Knowing how to read a check is a fundamental skill for an auditor and it is a way to assess whether a fraud may have occurred or not.
Years ago, I was examining checks at Utica Psychiatric Center from patient accounts. I noticed large checks supposedly made out to the patients relatives after the patient passed away. In examining the back of the checks, I noticed many of the checks were cashed at the same local bank, by the same teller and that the signature of the endorsers were similar. This discovery ultimately lead us to the business office employee who was stealing from the patient accounts.
Now, let’s look at an actual check the audit manager from Clifton Larson had access to in Dixon, Illinois. Here is a $250,000 check made out to Treasurer – not to any specific treasurer such as Treasurer, State of Illinois.

The back of the check is the real give away! The endorsement shows it is being deposited into the Fifth Third Bank in Dixon, Illinois.
This particular account number (which was available to the audit manager) was for an account that Rita Crundwell had established as a City account that only she had access to and only she knew about. There were many checks like this.

These checks were supported by phony invoices from the State of Illinois to reimburse the State for capital project expenditures that were a shared city/state responsibility.
So the audit manager had several clues this might be a fraudulent check:
Simply examining the checks could have exposed this fraud. It is a basic task auditors should do during the course of an audit.

In addition to examining the check, it is important for an auditor to actually verify the substance of the underlying transaction – did we get what we paid for?
But incredibly, the Clifton audit manager believes an invoice is sufficient evidence for an expenditure. If she truly believes this, than no fraud would ever be uncovered by an auditor. Most fraudulent transactions I’ve uncovered were supported by phony documents.
In her deposition, she said: 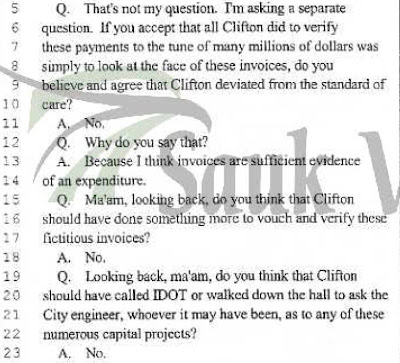 So the audit manager believes an invoice is sufficient evidence of an expenditure and at no time did anyone go out to physically examine the capital project to see if Dixon got what it paid for.
This simple step would have uncovered the fraud.

In addition, the phony invoices Rita Crundwell created did not have the normal supporting documentation including a corresponding purchase requisition or evidence of proper city approval.[ii]

Bank confirmations are a standard part of the audit process. The auditor is seeking to determine from an independent source (the bank) what accounts are owned by the entity being audited and what are the balances in the account. Confirmations are not typically part of a compilation process and thus further support the fact that Clifton Larson was doing an audit, since Clifton did the bank confirmation.
In 2010, the Bank disclosed the existence of the fraudulent account Rita Crundwell had established yet the auditors did not act on that information. 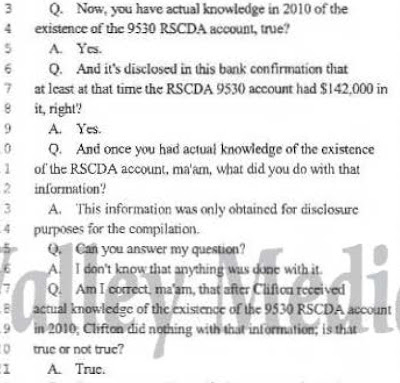