Again, we’re confronted with a CPA firm that has harmed the auditing profession.
This time, PricewaterhouseCoopers (PwC) was doing a consulting assignment for the Bank of Tokyo-Mitsubishi (BTMU). The New York State Department of Financial Services investigated the assignment and concluded, “PwC – under pressure from BTMU executives – improperly altered an historical transaction review” (HTR) report submitted to regulators on wire transfers that the Bank performed on behalf of sanctioned countries and entities.”
The purpose of the engagement was to ensure that transactions with Iran and other countries under United States sanctions were properly handled:
“[PwC] conducted a Historical Transaction Review (“HTR” ) for BTMU. The HTR analyzed BTMU ‘s U.S. dollar clearing activity between April 1, 2006 and March 31, 2007. Its purpose was to: ( I) identify any U.S. dollar transactions that potentially should have been frozen, blocked or reported under applicable OFAC [Office of Foreign Asset Control] requirements; and (2) investigate the relevant transaction set for compliance with OFAC requirements.”
PwC claims it did this consulting assignment under Statement on Standards for Consulting Services No. 1 issued by the AICPA. Those standards say the consulting firm should:
“Serve the client interest by seeking to accomplish the objectives established by the understanding with the client while maintaining integrity and objectivity.”
In addition, Article III of the Code of Professional Conduct describes integrity as follows:

“Integrity requires a member to be, among other things, honest and candid within the constraints of client confidentiality. Service and the public trust should not be subordinated to personal gain and advantage. Integrity can accommodate the inadvertent error and the honest difference of opinion; it cannot accommodate deceit or subordination of principle.”

Unfortunately, PwC allowed the client bank to edit its report and as a result, significant changes occurred between the original draft and the final report.
Originally, the report said:
“While we agree in theory, had PwC know [sic] about these “[deleted Special]Written Operational Instructions” at the initial Phase of the HTR then we would have used a different approach for completing this project.”
The final report, after suggested edits from the bank, said:
“We have concluded that the written instructions would not have impacted the completeness of data available for the HTR and our methodology to process and search the HTR data was appropriate.”
In an initial draft of the report, PwC included paragraphs from a bank manual outlining “special instructions” employees should follow to ensure that transactions with countries under United States sanctions did not draw attention. PwC deleted those paragraphs in the version of the report sent to regulators, again based on suggested edits from the bank.
From at least 2002 to 2007, BTMU had unlawfully cleared through the Bank’ s New York State licensed branch about 28,000 payments, valued at about $100 billion. These improper payments involved Iran, Sudan, Myanmar, and other entities under US sanctions
So as the United States fights terrorist states around the world, PwC does nothing to help our nation while it harms its reputation and the auditing profession.
I wonder what kind of action the accounting profession will take against the PwC employees who failed to follow the Consulting Standards and the Code of Professional Conduct? (See https://davehancox.com/2014/08/illinois-takes-no-action-against.html-taking no action by our profession is all too common – even on big publicity events)
The New York State Department of Financial Services fined PwC $25 million and has suspended the firm for 24 months from accepting consulting engagements at financial institutions regulated by the Department of Financial Services.
Here is an example of the edits suggested by the bank – there were several iterations of these edits. 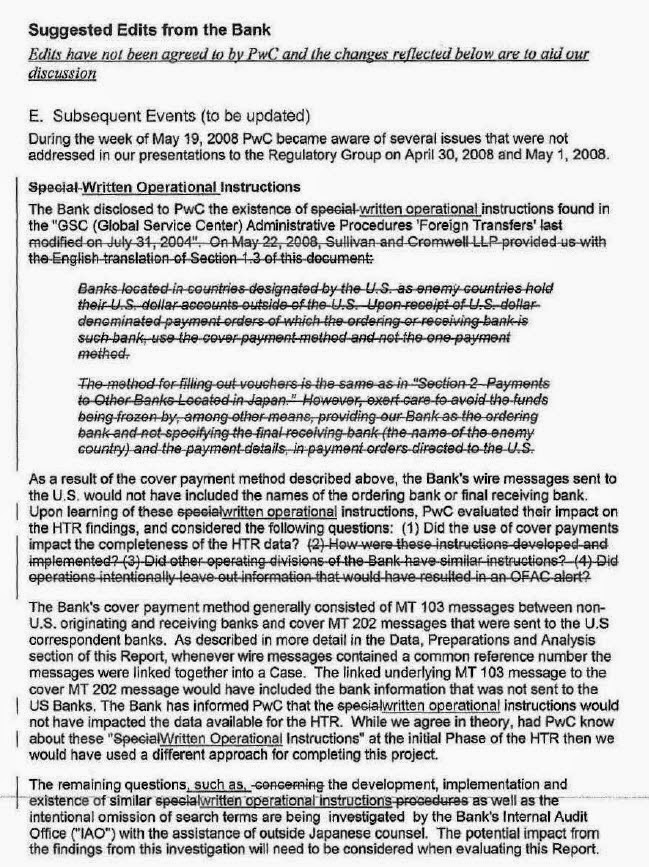