Here is a classic fraud that could easily have been prevented or quickly detected with the right internal control system in place (see links below). $40 million buys an incredible number of computers and tablets. Finance Offices tend to focus on individual transactions and seek to assure appropriate documentation is available to support the transaction. […]

The AICPA has issued a proposed Statement on Auditing Standards entitled: UNDERSTANDING THE ENTITY AND ITS ENVIRONMENT AND ASSESSING THE RISKS OF MATERIAL MISSTATEMENT The challenge for the reader is that the standard is 207 pages long and it amends 7 other standards. The goal of the standard is admirable. The AICPA is trying to […]

The New York State Comptroller is complaining about State agencies obstructing audits. In his 2015–2016 Annual Report on Audits of State Agencies and Public Authorities. The Comptroller complains, “For the reporting year 2015-16, four agencies significantly delayed, obstructed, or otherwise impaired the scope of six audits…” For example, the Comptroller said: “ESD [Empire State Development […]

The NYS Comptroller’s Office issued an interesting audit report (2014-S-4) about dead people. The auditors found, “NYSOH [New York State of Health program] enrolled deceased individuals and continued Medicaid coverage for individuals who had died after enrollment…” “During our audit period, 354 deceased individuals were identified in NYSOH as active Medicaid recipients. Of the 354 […] 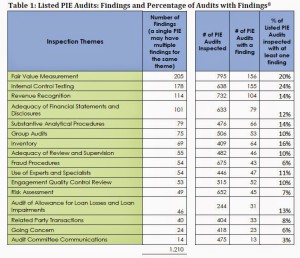 The International Forum of Independent Audit Regulators (IFIAR) was established in September 2006 by independent audit regulators from 17 countries, including the Public Company Accounting Oversight Board (PCAOB) from the United States. IFIAR has issued its third survey of regulatory inspection findings of significant audit firms in their jurisdictions. The initial survey, released in June […]